Having a Bad Trip? – Your DNA May Explain How You Are Going to React to Psychedelics 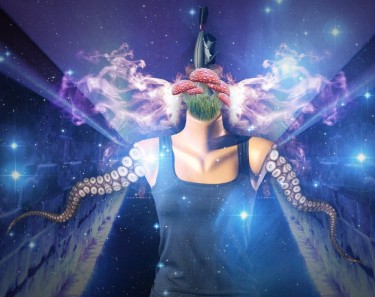 Not Having A Good Trip? New Study Shows That Your DNA May Be The Reason Why You React To Psychedelics Differently

The use of psychedelic therapy, either under the guidance of a medical professional or on your own, is rising dramatically in popularity.

Psychedelics, especially psilocybin mushrooms, mescaline, MDMA, and LSD, have been promising in the field of mental health: they have shown to be successful in reducing the symptoms of mental health disorders, even where conventional treatments have failed. From obsessive-compulsive disorder to post-traumatic stress disorder, depression, anxiety, and more, psychedelics bring new hope for people who have been struggling to regain normalcy in their lives.

But that doesn’t mean it will work for everyone.

A report by Technology Networks uncovers the results of a recent clinical trial where researchers from the North Carolina at Chapel Hill School of Medicine revealed that psychedelic drugs were effective in inducing the same effects as selective serotonin reuptake inhibitors (SSRIs), which are a widely-used first line of defense in treating numerous mental health conditions. They particularly studied escitalopram, an antidepressant.

But they also found that psychedelics as well as SSRI’s don’t have the same results in everyone – and genes could explain why. The researchers identified the primary receptor that psychedelics bind to in the human body: 5-HT2A which shares an almost identical chemical structure to serotonin. They also found that the gene variants they analyzed reflected mutations in a genome known as the single nucleotide polymorphism (SNP); the mutations were 7 alleles that are found in the biology of most human beings, explains Gavin Schmitz, first author of the paper.

He tells Technology Networks that the frequency of the alleles in humans ranges from 0.003% to 7.9%.

The research team then utilized assays to determine how various gene forms of 5-HT2A responded when they were binding to any of the four common psychedelics: psilocin, LSD, DMT, and mescaline. “Once 5-HT2A is activated by a drug, it has several options on what to do next,” Schmitz says. “It could signal through G proteins (in this case Gq) or recruit βArrestins [a type of signaling protein], and the relative balance of whether it chooses one option more often than the other depends on the drug. The two assays we used test those pathways independently, which means that we can see how much the 5-HT2A prefers one pathway over another and how that balance changes with different drugs, different SNPs, and over time,” he said.

The researchers also discovered that when there were combinations of receptor types and drugs analyzed, the drug’s potency varied. For example, one receptor was 9 times more potent when responding to mescaline compared to others.

“Clinical studies have found a wide variety of responses to psychedelic drugs, with some patients seeing huge benefits after treatment and some seeing no benefits at all. Our study suggests that genes matter in determining how sensitive we are to the effect of psychedelics,” Schmitz said.

When asked if he thinks that our genes could have an impact in how we respond to psychedelic hallucinations, Schmitz said, “I think this is absolutely possible.”

“We are all a little bit different from each other and those differences matter especially when it comes to deeply personal experiences,” he concluded.

Other Factors That Affect Experience with Psychedelics

Even with cannabis, we know that everyone’s endocannabinoid system is different. We also know that there are numerous factors that affect how we respond to strains – and the same goes for psychedelics.


Aside from genetics, there are other factors at play. Another study sheds some light on this, point to one’s state of mind when medicating with psychedelics.

Study author Natasha L. Mason, a Maastricht University PhD candidate, explains that the outcomes of psychedelic use are linked to environmental, personal, and emotional factors. “There is a renewed interest in the use of psychedelics in the treatment of certain psychiatric conditions, like PTSD, anxiety, and depression. Importantly, it has been suggested that factors aside from the drug can influence the acute experience and mediate long-term effects. These factors include set (or, the internal state of the individual, like mood and well-being and certain personality traits), and setting (the environment in which the individual is taking the drug in,” Mason explains to Psypost.

“With this renewed interest in the (therapeutic) use of psychedelics, it is important to define optimal circumstances for administration of these substances. Specifically, as psychiatric populations often display clinical characteristics that are suggested to negatively impact the psychedelic experience, it is important to establish whether psychedelics are still a suitable therapeutic option, not leading to (more) negative, unwanted effects,” she explains.

Mason and her team of researchers set out to analyze the response of 1,967 psychedelic users from internet forums on polls surveying them on their psychedelic use. It also asked about their personality, state of mind, and other factors that could affect their trip.

Most of the subjects said that they used psychedelic drugs while they were in a good mood but they also found that various psychedelics were linked to differences in settings; for instance, over 80% of them said that they took psilocybin or LSD in the comforts of their residences while more than half of them said MDMA was usually consumed at a social event and ayahuasca at spiritual or ceremonial settings.

“The main take-away from our study was the finding that individuals with clinical characteristics (low well-being and higher scores in certain personality traits) report consuming psychedelics with positive outcomes. Interestingly, when comparing the ‘clinical’ group to the ‘healthy’ group, the clinical group was more likely to experience a positive mood change,” she said.


These findings are significant because if means that set factors should be taken into consideration by medical professionals when trying to treat patients using psychedelics. It was also interesting that personalities played a big role in the outcome of their experience with psychedelic drugs, such as the fact that they discovered – those with higher neurotic scores tended to report more negative side effects.

HAVING A BAD TIME WITH EDIBLES OR SHROOMS, READ MORE..

HAVING A BAD CANNABIS TRIP, HERE IS WHAT TO DO FIRST!