Can You Mix 5-HTP with Cannabis? 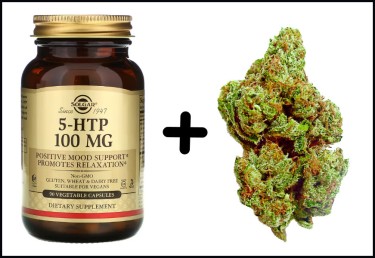 5-HTP, which stands for 5-hydroxytryptophan, has become a popular supplement over the last few decades.

When consumed, the body converts it into serotonin, so there are many people who consume it with the hopes that it can help treat depression and anxiety as well as other conditions. This happens because 5-HTP is actually a precursor to serotonin and even melatonin, so there are people who find relief from insomnia by supplementing with it. Additionally, it can help with pain management, anxiety, mood, and appetite suppression.

Since 5-HTP cannot be found in the food we eat, supplementing with it is believed by many to be among the best ways to increase one’s serotonin. There are numerous studies backing up the efficacy of 5-HTP when taken for a short period of time, though it shouldn’t be consumed for too long. However, consuming 5-HTP has been associated with some mild side effects: these include heartburn, stomach upset, diarrhea, dizziness, and nausea.

Be aware that 5-HTP is not something that anyone should self-medicate with. If you’re interested in its potential benefits, always discuss it with your primary care physician first. This supplement also has numerous drug interactions, so mixing it with one or more different types of medications can have unwanted effects. For example, 5-HTP should not be taken together with antidepressants, tricyclics, tramadol, monoamine oxidase inhibitors, dextromethorphan, and even marijuana.

Why You Shouldn’t Mix 5-HTP with Marijuana

Generally, 5-HTP is well tolerated provided that you take only the prescribed dosage. It can work for many people but it should not be mixed with marijuana or any derivatives of the plant.


There are some people who report benefits to mixing both substances, saying that it can make dreams more intense, prolong erections, and improve the mood more efficiently than using just one substance alone. But keep in mind that can be extremely dangerous to mix 5-HTP with other medications including marijuana and CBD. Some of the side effects you may feel from doing so include anxiety, shivering, increased heart rate, heart rhythm irregularities, and even death. There is also a possibility that it can affect your mental health when you mix them because of the opposing effects (5-HTP is a stimulant while cannabis derivatives are a sedative).


For 5-HTP and the compounds in marijuana to work in the body, they are metabolized in the same pathways. This can thus amplify the effects of each to an point that it can no longer be controlled, resulting in dangerous and unwanted effects.


Serotonin syndrome may also occur when you mix both 5-HTP and marijuana. Serotonin syndrome is characterized by the production of too much serotonin in the body, resulting in aggression, seizures, increased heart rate, difficulty breathing, and psychosis.

How to Consume Marijuana to Boost Serotonin Production

For individuals that are interested in boosting serotonin production for many purposes especially to help with depression, there are certain ways around consuming it. However, cannabis or any other medicine should not be seen as a cure-all if you are trying to address depressive effects.


Increasing serotonin levels and treating depression should be treated holistically because there are so many factors at play. Simply taking cannabis or 5-HTP alone is not a sustainable means of increasing serotonin, but the endocannabinoid system does have an effect on serotonin production, albeit a complex one. The endocannabinoid system helps to regulate many functions that serotonin assists with as well, including emotions, mood, appetite, and sleep.

The compounds in marijuana also have their own ways of addressing depression and other biological imbalances. However, duration and dosage all have varying impacts on how we feel.

Studies show that taking low doses of marijuana is best to increase serotonin production, while taking too much is not ideal. In one animal study conducted by researchers at McGill University, they found that low THC doses was effective at increasing serotonin and addressing the symptoms of depression. On the other hand, consuming too much has the opposite effect.

“Low doses had a potent antidepressant effect, but when we increased the dose, the serotonin in the rats’ brains actually dropped below the level of those in the control group. So we actually demonstrated a double effect: At low doses it increases serotonin, but at higher doses the effect is devastating, completely reversed,” explained Dr. Gobbi, lead author of the study.

“As a psychiatrist, I noticed that several of my patients suffering from depression used to smoke cannabis. And in the scientific literature, we had some evidence that people treated with cannabis for multiple sclerosis or AIDS showed a big improvement in mood disorders. But there were no laboratory studies demonstrating the antidepressant mechanism of action of cannabis,” she said. It can be tricky to identify the right dosage of marijuana when you are smoking it, which is why it’s challenging to navigate proper dosing for treating depression.

While marijuana and CBD are generally safe and well-tolerated, it’s a completely different ballgame when you talk about mixing it with other drugs. Never mix marijuana with 5-HTP or other supplements unless your physician has given you the green light to do so, despite the tempting effects that you may be able to feel when combining.


Last but not least, always be sure to consult a medical professional before self-medicating for any purpose, whether it’s for recreational or medical purposes. 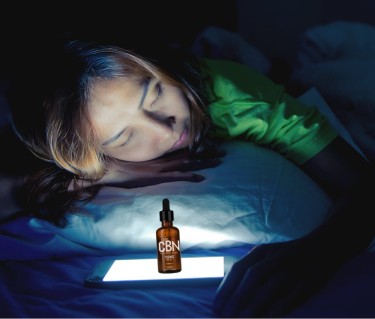 CBN GIVES MELATONIN A RUN FOR ITS MONEY FOR SLEEP?