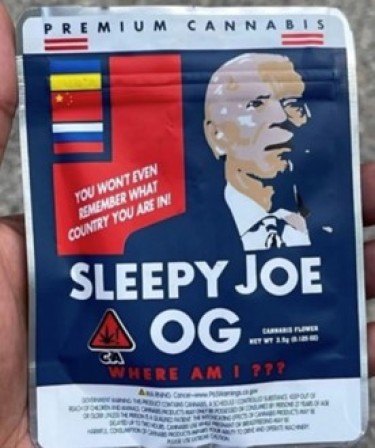 At this point, I’m starting to feel bad for President Biden. It has become painfully obvious that Biden is having trouble “keeping up” with the rest of the world. All over the world, people are acknowledging that the leader of the free world’s “gaffs” aren’t gaffs but most probably Alzheimer’s or early stages of dementia.

The fact that the Democrats are trying desperately to convince the world that this isn’t so is only making things worse. Since he was inaugurated as president, his approval has tanked to historic lows as inflation has risen to historic highs.

This has obviously sparked some ridicule from the people, for example the #LetsGoBrandon issue from earlier this year, many people refer to him as “President Brandon”. However, another slur against the sitting president is “Sleepy Joe” – which is infinitely better than “Sniffer Joe – a man on a mission to make women and girls as uncomfortable as possible”

Yes, that dude is the leader of the “free world”.

Sleepy Joe got some more traction lately as Snoop Dog revealed a premium cannabis strain called “Sleepy Joe OG” which contains a picture of the president with a confused look on his face, with bright red letters saying, “Where am I???”

On the top left of the package, you’ll see the flags of China, Ukraine and the Russian flag on a red background that reads, “You won’t even remember what country you are in!”

According to a Daily Wire Article, some of the community commentary included;

People had some fun with the post. “Do I hit it and get my vote back?” one person wrote. “Snoop hook me up I need whatever joe smokin,” another wrote. “Don’t ride a bike after u hit this,” wrote a third. – DailyWire

While this is all good and fun, the current sitting president also brings up an important point. Can you be too old to run the country? If so, what’s the correct “cut-off date” for people to run for president. Because the way things are going, Trump is going to run again in 2-years and we may have 80-year-old dinosaurs trying to run our lives…

Do we really want that?

Setting an age limit for being President?

While some might argue that excluding people based on age from participating in presidential elections, I argue that it’s necessary in order to be able to adapt to the times more effectively. Let’s face it, Biden is old school.

He’s against cannabis despite everyone being in favor of it. He’s trying to be “progressive” by putting in LGBTQ people in positions of power (which isn’t a bad thing) without seeing if they are properly qualified for the position (which is a bad thing).

When tokenization becomes the mean, then we’re fucked! Because then you get unqualified people with a lot of power making erroneous decision that affect millions. As a result, you get social friction and this could escalate if left unchecked.

Which is why I think it’s not a bad idea to limit the age for a sitting president to 60-65. At that age, you’re still healthy enough to work long hours, to have your mental faculties in good shape, and the vigor to handle the job.

You won’t be falling on stairs or off your bike because you are frail and brittle. You won’t be reading teleprompter instructions during speeches, and you sure as hell won’t be “gaffing” so much.

This isn’t to say that older people aren’t useful. On the contrary, in all ancient societies, the elderly were advisers. They bring experience of the past to help the leader navigate the waters of the present into the future we all want.

Biden, unfortunately, is currently not in the mental space to even act as an advisor. Like the package says, “You won’t even remember what country you’re in!”

But let me be real for a second…can you imagine Kamala as the president if Biden takes a turn for the worst (which is very likely). With her speeches and blatant “not knowingness” – the US would certainly suffer under such a leadership.

For the sake of everyone, I’m hoping that Biden can make two more years because Harris is simply not an option. Also, I think it would be the worst thing for women to have the first sitting president gain her position because “The first choice was old and couldn’t keep his mental faculties in check”.

Nonetheless, it’s important to start having these kinds of conversations because if Trump comes back – shit is not gonna get better. We need fresh blood, the dinosaurs need to go extinct…we need leadership that can actually lead…Who that is…I don’t know!

But it certainly can’t be the previous two options…on the brighter side…have any of you tried Sleepy Joe yet? I heard it will make you read teleprompter lines…

WHY YOU WANT THE HARRIS PLAN FOR CANNABIS NOT THE BIDEN ONE!

8 weed strains for stargazing, comet chasing, and blowing your mind