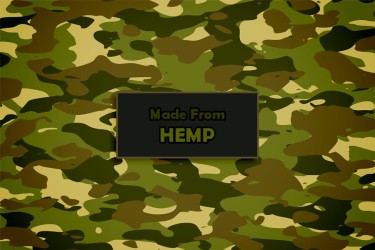 In the US Army’s continuous quest on how to be more efficient, they are now considering the possibility of using hemp fibers to create uniforms that would better conceal them from the enemies.

But army soldiers are forbidden from consuming hemp-made CBD, even if it was legalized last 2018. Would they then be able to benefit from hemp-made uniforms?

Product Manager Soldier Clothing and Individual Equipment posted a request for information to check for answers. “This effort is part of a Fiscal Year (FY) 2022 effort to support the Operational Clothing and Individual for the Improved Ghillie System (IGS). Interest is specifically in a yarn/twine/thread used to break up the Snipers outline made from Jute, Hemp, or similar natural fiber,” it says.

The notice goes on to explain that they are in need of new uniforms that are better at concealing them. “The IGS is a new and improved Sniper concealment system developed to meet the concealment needs of the Sniper community,” it says. “The IGS shall have amendable camouflage materials (e.g. jute, hemp, or similar natural fiber) that can be used to change the appearance of the sniper. The IGS Jute, Hemp, or other natural fiber will help conceal the Sniper and Scout during missions allowing them to remain undetected within close proximity of the enemy forces,” says the notice.

In addition, the new uniforms are required not to pose any health hazards and should be safe for long periods of skin contact.

The request should be responded to by the Department of Defense and other relevant authorities in charge, by July 27th at the latest.

It’s not the first time that the military has expressed an interest in using hemp.

Back in 2020, for one, researchers for a university in Wisconsin as well as some military members were in talks about the potential of hemp fiber in replacing the polymer and polyester used in Army vehicles. The researchers worked on making this a possibility but it requires money to do so – though two state lawmakers helped to give them the $250,000 grant needed to make it possible.


The military was interested in using hemp for other things aside from uniforms, such as seat belts and seat covers. Even if they are not allowed to consume CBD, they are well-aware of the benefits of hemp. It would also be much better for US hemp farmers as they would benefit from it, as opposed to sourcing fabrics from other countries that the US already has tensions with.

State Rep. Tony Kurtz, a former US Army helicopter pilot and an organic grain farmer, is a sponsor of the bill. According to Kurtz, the Army as well as other branches of military have their eye on hemp because the polyester blend that has been used in their uniforms, aircraft and vehicles.  “One, it actually has like a shiny tint to it and the enemy can actually see that shine from far distances,” Kurtz explained, as reported by Hemp Industry Daily.

“The other thing with polyester… when polyester burns, it shrinks, and it shrinks into bare skin. And so many, many soldiers and many, many Marines over the last several years in Iraq and Afghanistan who wore polyester and were involved in perhaps an IED (roadside bomb) blast or some other type of explosion, that material would literally melt into your skin,” he added.

Kurtz says that hemp wouldn’t have the same effect.

The use of hemp for manufacturing textiles is ancient.

In fact, hemp has widely been used by some of the world’s oldest civilizations for making fabric. There are records of hemp being used as far back as 10,000 BC in northern China, where it was cultivated to make tough ropes. By 2800 BC, legend has it that Emperor Shen Nung taught his people to grow and weave with hemp and make them into clothing because of its sheer strength. Several years and centuries later, the strength of hemp fabrics became more widespread.

Today, it’s no surprise that even the military are interested to start using uniforms made with hemp. Industrial hemp can be used to make more than 5,000 different textile products because of its durability and strength. However, the true potential of hemp was neve realized because of prohibition and the War on Drugs.

Due to budget constraints, our military wears clothing made by the cheapest bidder, out of nylon, cotton, and other poly blends we aren’t even really sure of. No wonder uniforms tend to break so easily. Military uniforms need to be much stronger, resistant to fire and abrasion, breathable, and porous – all at the same time. A large feat, if you ask us. But hemp offers all these benefits and more.

It’s about time we pay serious attention to the use of hemp for protecting our soldiers and marines. In fact, while current research, anecdotal data, and historical use already proves that hemp would be the best alternative for the army’s needs, more importantly – it can help save their lives while they’re on the field.

In addition, hemp is so much more environmentally sustainable to produce as no pesticides are required to grow it. On top of that, hemp requires half the amount of water that cotton does, which is helpful especially in areas affected by drought.

We hope this request for information would be taken seriously by the government.

THE ARMY AND WEED, READ MORE… 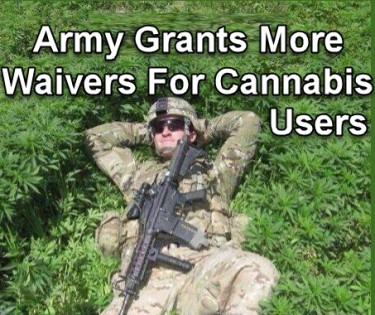 THE ARMY ISSUES WAIVERS FOR CANNABIS USE, READ THIS!