Your Dog or Cat Just Ate Your Cannabis, What Should You Do First? 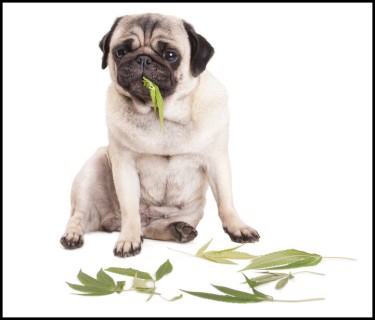 Pets are companions with whom many owners tend to share most things. Dogs and cats are prominently involved in the daily activities of their owners. This has brought on instances where these pets end up eating more than what is given to them to eat in their food tray. The question of what to do when your pet eats weed is a good question for all pet owners to know the answer to. Read on as we address some of the primary things to do when your pet eats weed and also answer if there’s a need to see the vet?

The first action of many pet owners when they realize that their pet has consumed weed is to panic. While this action is very natural and expected, there are a couple of things that need to be done for the well-being of the pet. Some of these things cannot be done in that panic state so the first thing to do is to regain composure and stay calm. After this has been done, there are some things that you must confirm before deciding whether or not you want to the pet to the vet.

There are different types of marijuana products that a pet can get their hands on. It is therefore important that you carefully ascertain what the pet has consumed to know how best to handle it. The commonest type of marijuana pets can consume are marijuana buds. They are also more dangerous to pets than the leaves of the plant. Likewise, oil and butter from the leaves of the plant contain high levels of THC and are dangerous to the pet. Marijuana products that contain mainly CBD are less detrimental to pets because THC is what majorly affects them in a negative way.

Cannabis edibles are very common nowadays and they can easily be consumed by pets. Surprisingly, some of the common edibles in circulation pose a great risk when consumed by pets. This risk is not limited to THC alone as ingredients like chocolate are very dangerous to dogs than THC. This means pot brownies can easily send your pet to the vet so it’s best to keep them away from them. Gummies and candy edibles are also very detrimental to the health of dogs. They contain xylitol which is very risky and possibly fatal to dogs.

Pet owners who have cannabis products in the house must be vast in identifying symptoms of weed toxicity in their pets. This is because it is possible for the pet to have consumed the weed already without leaving any traces. At this point, the symptoms of weed toxicity are the best bet to inform the pet owner on the best course of action. Marijuana Toxicity in pets is a very serious condition and it must be treated as such. Two cases of deaths of dogs after marijuana consumption in Colorado between 2005 and 2010 show how detrimental it can be.

Pets begin to show signs of marijuana consumption very early depending on the type of product consumed. Dogs or cats that consume marijuana buds, flowers, oils, or butter will show signs within the hour. When pets consume edibles, it takes longer for the symptoms to show. It can take as long as three hours before the first set of symptoms manifest. Like humans, animals react differently to marijuana due to physical and biological variations. The first set of symptoms common to pets when they consume is a depressed and lethargic state. Some animals on the other hand are known to become over-excited and full of anxiety.

The second set of symptoms is gastrointestinal disturbances after the THC has been absorbed into the bloodstream. Diarrhea, drooling, and vomiting are common to animals as THC is being stored due to its solubility in fats. Other associated symptoms include dilated pupils, tremors, low body temperature, leaking urine, slow heart rate, and low body temperature. Some of these symptoms might not manifest but once two or three starts manifesting, it should advise you on what to do next.

Marijuana toxicity is a very serious issue that must not be taken lightly by any pet owner. The first series of actions are majorly supportive as the final base of actions to help the pet must be done by the vet. Irregular heart rate and vomiting are strong signs that marijuana toxicity is bad and without debate, such pets must be taken to the vet. A seizure is worse and must be treated as an emergency. Once the dog gets to the vet, the first thing that will be done is a physical examination to check its vitals. Afterward, the decision on whether or not to hospitalize the pet will be dependent on the condition of the pet and its response to medical interventions.

While the pet is at the vet, its condition is treated on a case-to-case basis. This means that the symptoms are treated individually through supportive care. For instances where the ingestion of the weed is discovered early and taken to the vet, the veterinarian will try to induce vomiting. This will delay and can eliminate the onset of the symptoms. In cases where symptoms have developed, the pet after hospitalization is administered fluids, anti-nausea medication, and cardiovascular support. For pets that consume brownies, chocolate is very harmful to dogs which means the treatment will be more aggressive. There will be a need to include activated charcoal, anticonvulsants, antiarrhythmics, and fluid therapy. This further shows why it is important to get the pet to the vet once ingestion and symptoms are established.

We have shown that once ingestion of weed is shown in pets, it’s important for the owner to take responsibility for some things. The owner must determine what the pet ingested and keep an eye out for symptoms. Afterward, it is paramount that the pet gets to the vet to ensure optimum therapy is established. 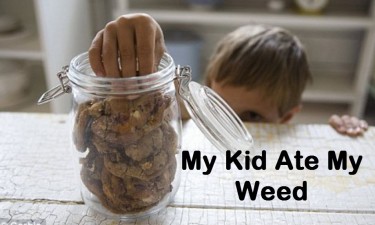 MY KID ATE MY WEED, NOW WHAT? READ THIS! 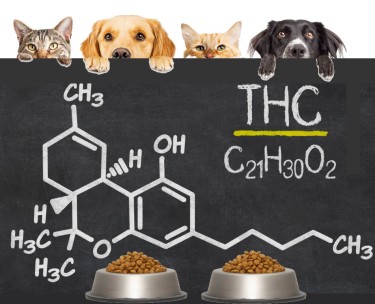 PETS AND THC, WHT ARE THE RULES FOR INGESTION?

Canadian College Campus Is First to Get Weed Dispensary