Is Solar Power the Future of Cannabis Growing if Electricity Is Such A Major Cost? 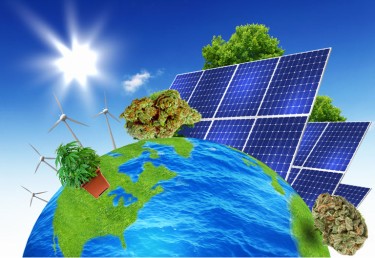 Installing solar panels in an indoor system of cultivation helps to significantly reduce energy consumption and the resulting cost of electricity.

Every farmer knows that indoor cultivation is quite energy-intensive. In fact, according to the data available, about 1% of the total energy supplied in the US goes into the indoor cultivation of plants. It is also predicted that by 2035, the number will surge up to 3%.

As regards indoor cannabis cultivation, it is estimated that all equipment used in the cultivation of high-quality buds in a grow room of 3.5m3 will use approximately 13,000 kWh of electricity annually. Furthermore, the equipment used to cultivate healthy and happy cannabis plants produces so much CO2. To have a clear picture, cultivating a kilo of cannabis bud will give 4.3 tons of CO2.

Because of the secrecy involved in indoor cultivation, its impacts on the environment and ozone layer could not have been determined till now. But, with cannabis legalization sweeping across the globe, numbers are beginning to roll in, indicating that indoor cultivation is not an eco-friendly venture.

Fortunately, there are several ways to go about these said problems. A solution is to move to outside cultivation, go back to the beginning and allow the wind to take care of air conditioning and the sun to be the lighting. However, this is not an option for many growers who reside in countries where cannabis is still considered illegal. Hence, there is a need to hide the plant.

Now, the other solution farmers in this kind of situation have all depends on the sun, although in a different approach. We are certainly referring to Solar Panels.

Grow rooms powered by Solar panels are not the latest inventions. This kind of setup has been popular due to its expensive initial cost of investment. But, ain’t solar panels becoming cheaper and more efficient in energy conversion, the issue of cost is slowly fading away.

Another reason why solar panel setups are not popular is the lack of technical know-how on the grower’s part. Many growers would rather go for tried and tested methods instead of experimenting with solar panel setups. This is the reality given there’s little room for an average grower to experiment since it could lead to crop losses and ultimately financial losses.

For close to a decade now renewable energy production has increased significantly courtesy of China’s high levels of production. Meanwhile, there has also been a steady advancement in technology in the same period causing renewable energy to become a more stable energy source. But, considering the working principles of solar energy, sodium light pressure in grow rooms can prove difficult to power. Sodium light pressure needs a lot of power to work which implies more batteries will be needed which will also take up more space.

Luckily, switching to CFLs or LEDs would help solve this situation, but how many expert growers are willing to make such a sudden switch? The best approach now is to design a hybrid system – one that uses both solar and the grid. This is a perfect solution to the dilemma. It offers a lot of renewable energy benefits while significantly reducing the cost of electricity.

For many who would want nothing less than a fully functional solar-powered grow room, the latest innovations in electricity storage come to the rescue. Today, high-capacity batteries that can produce up to 10kWh and are efficiently charged by solar energy have been developed. These batteries can also be charged with electricity during cheap hours and so can be used in a hybrid system. A good example of such a battery would be the high-end solar Tesla battery which was made available in the market just last year.

Setting up a completely renewable energy system for indoor cultivation is an expensive venture. Picture buying the expensive 10kWh battery manufactured by Tesla which is not even sold at local utility stores. You would need to buy solar panels too which are not cheap either, although prices vary from one country to the next.

Let’s assume a grow room of size 0.6m by 0.6m needs total energy of 2kW and solar panels cost $7 per watt. That’s a total of $14,000 spent on solar panels and it’s obvious that you spend more with a bigger room. For the Tesla battery, one costs about $3,500, and buying just one certainly won’t cut it.

Although one vital thing you should know is that all of this is a one-time purchase. Once the panels are installed, they start paying you back. The panels won’t need changing and maintenance is minimal (periodic cleaning of the panel surface). Efficiency tends to drop per year though, with an estimation of 0.5% drop in efficiency which is highly negligible. Most panels are said to maintain an efficiency of 80% after 25 years of use.

The batteries, on the other hand, will need to be frequently changed as capacity starts decreasing from the first day. Battery capacities after five years would have degraded considerably. While it comes off as expensive to set up this system, understand that the cost of electricity can reach these numbers in years to come depending on your operational size.

Taking the costs to establish this system into consideration, the ROI could range between three to four years. But as technological advancement meets the field, the time frame keeps reducing. Imagine not having electricity troubles or worrying about electricity costs, or not getting a standby generator to avoid suspicion. Also, imagine not contributing to the carbon footprint in the environment – that’s what solar panels and renewable energy offer.

Frankly, venturing into establishing a solar-paneled powered grow room requires a lot of logistics and planning. And most importantly, a large pool of investment capital. For growers who already have a working setup that doesn’t involve any renewable energy sources, it would be best to ease into the renewable system, especially if you operate a huge setup.

However, for growers just building a new setup, integrating solar panels in the system should be something of consideration. Because the truth is told, self-sustainable grow rooms are the future of indoor cannabis cultivation.

WILL US MARIJUANA EVEN EXIST IN 10 YEARS AT THESE COSTS?