Have Your Tried Lighting Up with Hemp Wick? Wait, What is Hemp Wick? 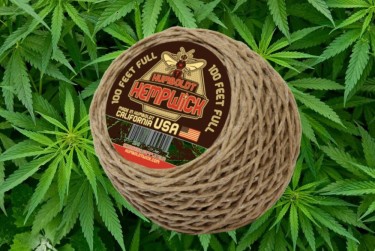 When it’s time to smoke up some cannabis, there’s the need to light up the joint. So be it a Bic or a Zippo, the typical butane lighter usually comes in handy for most users. Truly, one could conclude that a lighter is the second most vital piece behind marijuana itself.

What Is a Hemp Wick?

Hemp wick is a long twine made from natural hemp fibers and coated with beeswax. Thanks to the beeswax, the hemp wick acts like a candlestick taking a very long time to burn. Hemp wick can be used to light pipes and bongs, and advocates affirmed that is a healthier option compared to matches or lighters.

For many decades, humans have used hemp wicks for various purposes. Today, manufacturers make use of durable long fibers of industrial hemp to produce the wick. These fibers are also utilized to manufacture cords, rooms, and various useful commodities.

To light up the hemp wick, you can use either a lighter or a match. Once you’ve done that, it slowly burns and it’s best used for a bong, bowl, or any smoking device. Since it takes a long time to burn, you can keep it ignited while you add more cannabis to the bowl. Once you’re done, you can blow it out and keep it neat for the next session.

Why Should You Use a Hemp Wick?

The problem has always been with the use of butane lighters. With butane gas, cannabis flame but at a very high temperature and once inhaled, it is considerably hotter, causing increased damage to the lungs and throat. The butane gas also mixes with the smoke which moves to your lungs causing it to be exposed to sulphur dioxide and carbon monoxides which are harmful substances.

On the other hand, when matches are used to light marijuana, the user inhales a combination of glue, wood, and various combustible chemicals. Furthermore, lighting your roll with a lighter or a match also damages the fundamental cannabinoids in the strain.

The increased temperature also affects the cannabis quality one consumes. The fact is terpenes and cannabinoids have distinct burn-off temperatures. When the temperature exceeds that, the benefits of these cannabinoids are lost. For example, terpenes are responsible for the characteristic taste and smell of weed. Burning these terpenes off ultimately reduces the flavor.

Advantages of the Hemp Wick

When hemp wick is used to light a joint, it offers a cleaner smoking experience. No doubt you still need a match or a light to kick off the process, but you set them aside immediately after the wick starts burning. Since a wick is produced from hemp, it is considerably healthier compared to butane. Hemp that does not give off poisonous flames linked with butane lighters and matches.

Another vital point is that hemp wick burns at a considerably lower temperature compared to butane since it isn’t a gas. This implies getting more cannabinoids from hemp-wick-lit marijuana to a lighter’s.

Hemp wick’s lower combustion temperature helps to conserve more cannabinoids and terpenes, so users will be getting more flavourful hits.

Lastly, lighting up a joint becomes more accurate with hemp wick. For example, it’s easier to corner a bowl with a hemp wick.

Disadvantages of Using a Hemp Wick?

While the hemp wick isn’t a perfect solution, its pros far outweigh its cons. The following are some of the downsides of using hemp wick;

Learning how to properly light a hemp wick takes some practice. If you’re already high or you suffer from poor hand coordination, you might bun something else aside from the hemp wick.

Even though hemp wick offers a lot of benefits, it’s not as common as you might think. Therefore, getting one at your local store might be more challenging than expected. However, it is easier to get one online.

A hemp wick is also quite inconvenient for on-the-road smoking sessions. A more convenient option would be to cut a small section but that could easily get lost.

Hemp wicks are characterized by a pungent smell which isn’t easy to get rid of or disguise.

How to Use a Hemp Wick

Hemp wicks vary in size but they are usually between some feet to several hundred. You can also get hemp wicks in various diameters. You should note that the thicker the wick the longer it burns.

The following is a step-by-step approach to how to use a hemp wick.

Once you’re done using the hemp wick, blow out the flame or put the tip in water. Make sure the flame is dead before returning it to the roll. Else it will keep burning without you knowing.

We advise you to store the wick in a clean place where it won’t collect debris and dust.

A lot of cannabis users are now beginning to use hemp wicks as a healthier alternative to igniting their joints. Produced from hemp fibers and coated with beeswax, hemp wicks burn for a very long time without producing harmful chemicals, unlike butane lighters.

If you are interested in getting a hemp wick, the easiest way to do that is to order one online as a lot of local stores don’t have the product stocked up.

How CBD Oil Is Made